Persian cats are available in plenty of colors and patterns that result from crossbreeding; which happens either naturally or through intended breeding.

The world’s beautiful domestic cat comes in many colors like solid grey.

Grey Persian cat is also available in other patterns such as torties and tabbies.

Like almost all the base colors which a Persian feline can appear in, there is a multiple collection that may suit your preferences.

The Grey Color In Persian Cats

It’s worth mentioning that some of what is actually considered blue Persians are grey.

In fact, there is an overlap in the terms used to describe the hues of cat color and coat.

For example, “red” Persian cats are considered orange too; because they are not bright enough.

They may also be referred to as ginger depending on the accompanying colors.

Another concern is the difference between silver and grey Persians. So, we need to consider the cat’s base color and stripes.

Thus, if a tabby has grey stripes on a grey background, we may call it a grey tabby.

But, if the kitty has black stripes on a light/white background, it will be a silver tabby cat.

Additionally, the dilution gene is in charge of grey-colored cats. A recessive gene converts the cats into a cream/blue color, which is a mixture of cream and soft grey.

That gene also turns black cats into blue/grey. So, when a cat has a mixture of cream/grey colors, he may have many stripes and patches.

To check if your Persian cat’s real color is grey, you may inspect the hairs on the tail’s tip.

This is the best way to know your cat’s true color.

Common Variants Of The Grey Color

As with other hair colors, you may find Grey Persians in a wide variety of various patterns.

The solid grey coat is the most common pattern since it only contains the grey coat.

The most Iconic type is the tabby with markings such as blotches, stripes, and spots.

These may include mackerel, classic, and patched tabbies.

There is also another pattern which is the tortoiseshell or tortie.

You can also find Grey Persians that include a mixture of these patterns.

They include tortie/tabby that mix markings such as spots, stripes, and blotches.

The Grey Persian cat is actually a blue feline that has grey blended in.

Indeed, the blue variant is not truly blue. It’s in fact blue with some silver in it.

Many blue Persians have a solid pattern with gold or green eyes.

The blue Persian felines can also have white color on the chest or undercoat.

The Brown Persians are so amazing that people often think of when they want to get a cat.

You may find a lot of Persians with a blend of grey/brown colors.

Breeders can easily breed cats in this type of color.

There are also other varieties which include a mixture of grey, cameo, cream, and white.

However, it’s worth mentioning that a real brown chocolate/cinnamon brown is so hard for breeders to get.

What we commonly observe in domesticated cats is absolutely a faded black.

The solid-black Persians contain a deep black from head to toe.

They may also have grey spots on the chest and ear tufts.

If the cat’s undercoat is grey, he has a black/grey or smoky appearance.

This is a similar variant to Grey Persian cats. So, some examples may include silver tabby, smoky silver, and silver cameo.

Silver cameo tabby is so famous for its bright colors.

Silver coat is very difficult for breeders to obtain.

Then, if you would like to get a silver Persian, so you should know that it is a difficult task to go through.

How Common Are Grey Persian Cats?

The most common colors of Persian cats are blue, cream, white and black. Grey is less prevalent but it exists in hybrid colors with hues such as black and blue.

Here are some examples :

These colors are eye-catching as solid grey Persians. It’s also important to know that grey cats are not as rare as other hues such as cinnamon/chocolate brown.

It’s worth noting that the demand for grey undercoats is commonly lower than other varieties of colors.

Therefore, It’s hard to get a grey Persian compared to other colors.

But, you may find some breeders who are specialized in certain colors like silver/ grey.

The Grey Persian cat is actually one of the most wonderful variants of this amazing breed.

They are not bright as silver kitties, but may still include attractive color patterns like tabby and tortie.

Grey Persians are still rare than other colors, but they sure are one of the best choices for cat parents. 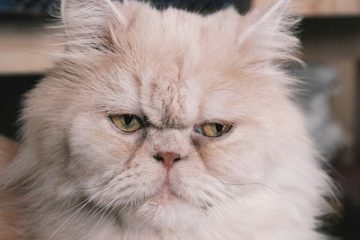 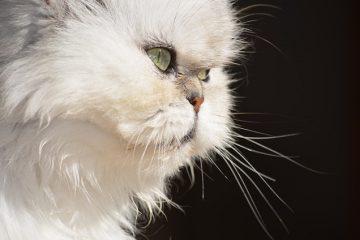